The former railway of Spoleto-Norcia has recently been restored. After long works of reconstruction and security measures, the segment between Spoleto and Cerreto-Sellano has been reopened. This part has a lengh of about 20 kilometers and constitutes a bicycling and walking itinerary of great beauty.

Some of the former building along the railways have been restored too. They constitute sites for welcoming and giving informations to the tourists. In addiction, the building of the ancient Spoleto Station hosts the interesting Railway Museum.

The Spoleto-Norcia Railway is a little example of Alpine Railway because it goes through part of the Appennini Mounts and has many galleries and viaducts. Their construction was necessary for the mountainous characteristics of the territory.

Because of the morphology of the territory, the railway has many plano-altimetric characteristics that make it a small treasure of  railway engineering. Along its totally 51 kilometers, they excavated a large number of galleries, designed sections of helical paths, constructed high viaducts and installed iron bridges to allow the convoy to reach the pass of Caprareccoa Gallery. The ancient railway then went down through the Nera Vallery and proceed in a flat segment along the Corno and Sordo Valleys, until reaching Norcia.

Inaugurated in 1926, the railway was interrupted in the Second World War and then definitely abandoned in 1968.

>> Do you want to visit the route of the former railway Norcia? Contact now the best farmhouse in Norcia and discover their offers! 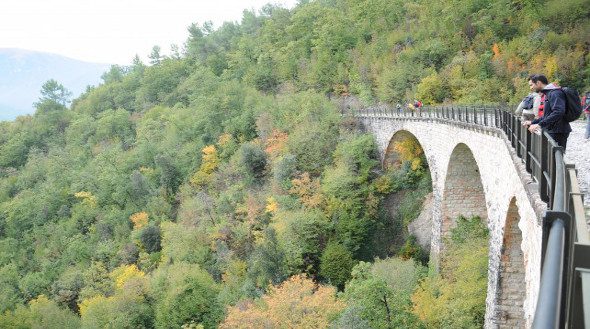 The idea to convert the disused railway line on a path destined to tourism dates back a few years ago and was followed by a meticulous safety measures of the race track.

Currently the old line few traces remain, having been cut away all the sleepers and rails, while today there are many toll booths are comfortable points to leave the car or info point for tourists.

Due to its location the former station Sant'Anatolia Narco can be considered a valid point of reference that allows you to divide the most demanding part of the route, that is the direction in Spoleto, Norcia, the easier direction. 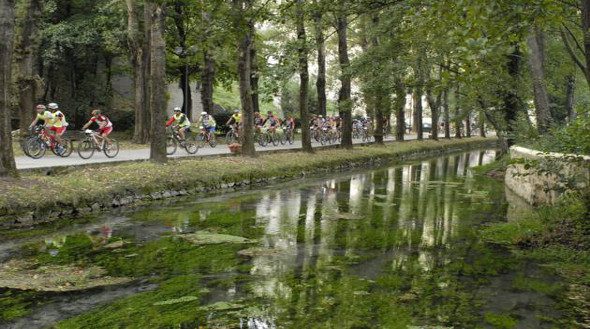 The Spoleto-Norcia Railway in MTB

On 23th Semptember 2012, they organized the first tour of the Spoleto-Norcia Former Railwsay: the entire path was travelled by bike starting from Spoleto until Norcia and the event, promoted by MTB Club Spoleto, was a great success.

Then they reorganized the Spoleto-Norcia Railway in MTB and it is now the biggest cycling-touristic event of the central Italy. In 2016, about 1500 cyclists participated in it; about 2000 cyclists, in 2007.

They are preparing the next edition, on 2nd September 2018.

>> To visit Valnerina and see the itineray of the former Railway Spoleto-Norcia, contact now farm houses of the area