Orvieto origins go back to the Etruscan civilization: the first Etruscan settlements, going back to the 9th Century B.C., infact, were found inside the tufaceous caves in the bedrock upon which today rises the city.

Annexed in the 3rd Century B.C. to the territories of Rome, it remained under the Roman domination until the decline of the Western Roman Empire. Afterwhich it became a free municipality, and during the struggles between Guelphs and Ghibellines, was a valiant opponent of Barbarossa, remaining faithful to the Pope. Riding on the support of the Papal State, it was allowed to prosper through the entire Medieval Period, reaching the top of its development in the 13th Century with the constitution of the General Council of the 400 and the election of the Captain of the People.

>> Do you want to visit Orvieto? Check it out now of the hotels in its vicinity. 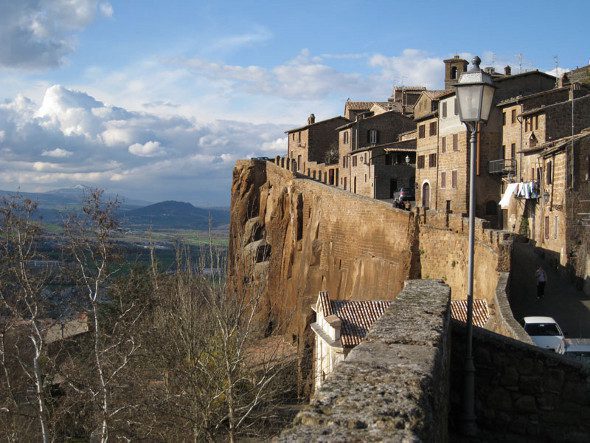 There are offers  for farm house in the area of Orvieto! Click and Consult them immediately.

It was during this period that one saw the fervent work of erecting palaces and holy buildings among which the very famous Cathedral stands out, dating back to 1263, undoubtedly the most important architectural landmark of the city, with its splendid Gothic facing and the richness of the ornaments and internal chapels. In the ancient town we also find the St. Patrizio well, built in 1527 based on a plan of Antonio da Sangallo il Giovane, the Palace of the Seven from 1300, the Palace of People Captain (12th Century) inside which took place the meetings of the People's Council, Saint Andrew's Church (12th Century), Saint Domenic's Church (12th Century), Saint Giovenale's Church (11th Century), Soliano Palace (1262) within which, one will find two museums: the Museum of the Opera del Duomo and the Museum of Modern Art. Moreover we remember the Mancinelli Theatre (1866), the suggestive Underground City and the Necropolis of the Crucifix of Tufo dating back to the Etruscan period.

>> If you've decided to visit Orvieto you should contact now hotels in its vicinity >> click this link.