The "Ceri" Festival of Gubbio, as every year, will animate the city on 15th May, on Tuesday for this 2018.

The event rooted in a very far past and it is considerated one of the oldest typical manifestations of Umbria and Italy. The festival involves in fact the entire populations of Gubbio and it attracts hundreds of visitors and curious.

To mark his importance and popularity, in 1973 the Umbrian Region took the image of three stylized candles ("ceri") as symbol of the region itself. 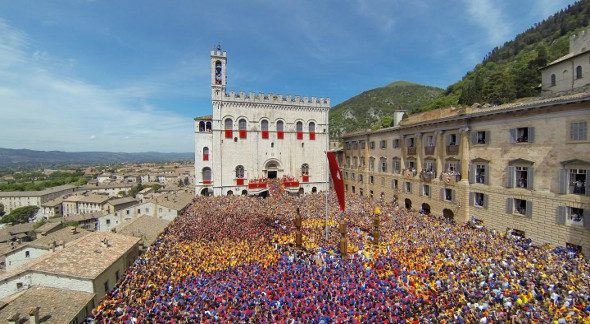 >> Participate to the "Ceri" Festival and visit Gubbio: live a unique and emotional event and stay in one of the most beautiful town of Umbria! Discover now all the farm houses of Gubbio!

The "Ceri", true protagonists of the Festival

In the most accepted hypothesis, the festival is linked to the religious celebrations in honor of Bishop Ubaldo Baldassini, the Saint Patron of Gubbio, dating on his death in 1160 and represented every year in the precisely day of 15th May. Another hypothesis rather known liked the event to the ancient pre-Christian pagan festival in honor of the god Cerere (hence perhaps the name "ceri") for the arrival of Spring.

The candles ("Ceri") make unique this festival: they consist in three wooden artifacts, placed on three stretchers that allow their transport. They are also characterised by their decorations and especially by their size. The candles have very special decorative motifs and they have on the top the wooden statues of the patron saints of Gubbio, Saint Ubaldo, Saint George and Saint Abbot.

With a height of nearly 5 meters, and a weight that reaches beyond 300 kg, looking at the sight of the candles that stand out into the crowd, advancing in the streets and squares of Gubbio, it's a unique spectacle.

On the first Sunday of May, after the religious celebration of the morning, the three "ceri" through the city for the first time and they are transported from the Cathedral of Saint Ubaldo to the Sala Maggiore of Consoli Palace. They will remain here, on display, until the fateful 15th May. 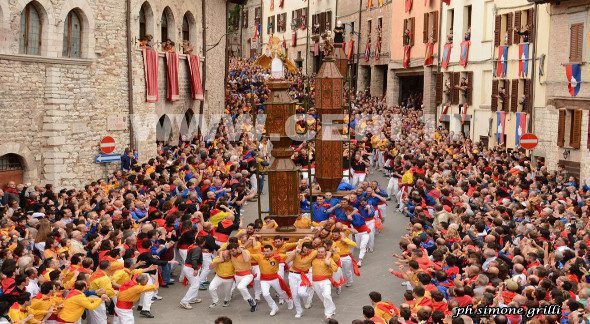 >> Look at the "Ceri" with your own eyes and take part at this particular and passionate festival! You can find here hotels, b&b and farmhouses to stay in the area of Gubbio

The Rising of "Ceri"

15th May in Gubbio starts with the roll of drums that at the sunrise wakes up the whole town, at the rhythm of the so-called "Ceri March". The day continues with a series of events and reenactments, which culminate at the end of the day with the Rising of Candles in the main square and with the race.

The rising is one of the most intense moments of the festival. It takes place in Piazza Grande, a place that for this occasion is full of a immense and colorful crowd, dressed with the colors of the 3 Saints honored by the candles. Once in the square, making their way through the crowd, the candles carried by the "ceraioli" are "mounted" and hoisted vertically.

The operation is particularly delicate: the candles are fixed to the respective stretchers, they fix the statues of the Saints on their tops and, at the sound of the "Campanone", the leader of each team ("Capodieci") climbs the poles of its candle, pushes forward getting up quickly the candle vertically, and then leaves immediately.

At this point, the candles are carried on through the streets of the city, each one with its own path, stopping in front of the homes of their ancient "Ceraioli"'s families. 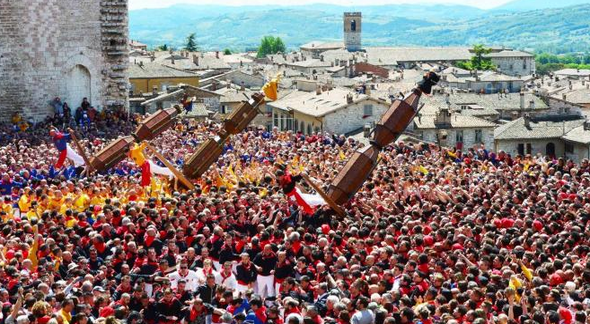 >> Come to Gubbio in occasion of "Ceri" Festival, to discover the traditions of the region! We sugest you the best offers for your holiday in Umbria

The day concludes with the Race of the Candles, definitely a very special moment.

In addition to being a test of strength, for the reason of the weight of the candles, the race is primarily a proof of great skill for "ceraioli". The candles in fact tend to fluctuate and it is really important to run and keep them as vertical as possible at the same time. Especially in the first part of the race, that cross the city streets, it must be careful to ensure that the candles do not touch on walls or windows.

The last part of the race takes place across the path reaching Igino Mount, that overlooks Gubbio, along unpaved roads leading to the Cathedral of Saint Ubaldo. Here, the physical effort of "ceraioli" has its peak, with the uphill road that reaches an average gradient of about 15%.

An important peculiarity of this race of Gubbio is that there isn't overtaking: the candles always run in the same order, the "philosophy of ceraioli" requires them to run as fast as possible, trying not to drop their own candle and giving more detachment is possible to the others in the travel times. 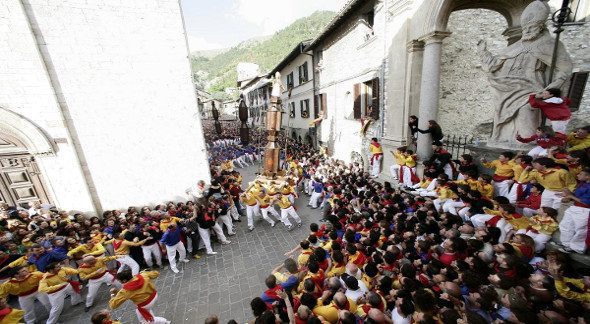 >> Come on and start to organise your holiday during the "Ceri" Festival of 15th May! Click here and select the event in the research bar, you will find special offers dedicated to the festival!

Do you want to know more about this historical and passionate manifestation?! Visit our page Festival of "Ceri" and Race of "Ceri", you will find many curiosities and useful informations!