For bike lovers 2013 Grand Tour Rando is the perfect way to enjoy southern Umbria, just 1 hour from Rome, a territory rich in surprises, a fantastic holiday in the name of sport, nature, wine and food, art and relaxation in natural contexts and environment of extraordinary beauty and uniqueness.

The randonneur discipline was born in France in 1904, in the framework of long-distance racing, organised by Henry Desgranges (who had also organised the Tour of France the previous year). The rules of randonnée are defined by the Audax Club Parisien, association which was also founded in 1904. In 1921, the Club, established the “Brevets Randonneurs Français”, which consists of certifications awarded to those athletes that succeeded in covering the estimated distances of the various events according to the relative schedules; in 1983 the certifications became brm “Brevets Randonneurs Mondiaux”. The year after the number of countries adhering to this formula increased. Italy, although having given birth to the discipline only joined in 1998 giving life to the ARI, “Audax Randonnée Italia”.

Do you want to live the magic atmosphere of 2013 Grand Tour Rando? Check it out now of the best farmhouses and hotels along the bike route. 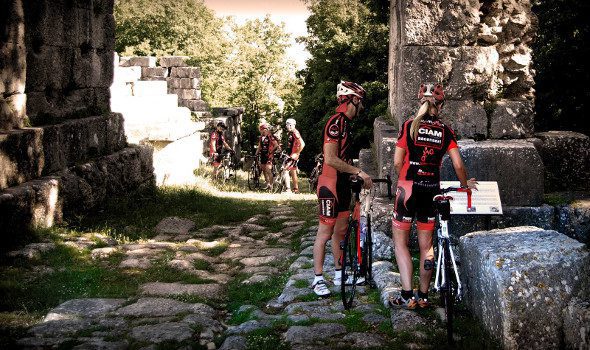 "Rando Spirit" means the discovery of a different cycling not exasperated by competition, classifications and starting grids, yet not for this less demanding or severe. The person at your side is not a rival to be beaten but is a travel companion, whatever position you arrive at is not important but only to arrive and nobody gets upset if you don’t ride hard, and maybe even offers you his wheel so you find the going less tiring. 2013 Grand Tour Rando is a way to travel and try less-known roads, where the bicycle is the true and proper Queen of the road and the cyclist its custodian that experiences places, landscapes, cultures and the sense of travelling.

It is an alternative to fast tourism leading you everywhere to take a photograph and share the beauty of the places with your travel companions that pedal at your same speed where competition does not count, but an attempt to prove oneself and go beyond one’s limits.

There are offers  for vacation rentals and hotels in the areas along the bike route! Click and Consult them immediately.

On 8 September 2013 a Randonnée Brevet of 212 km with 3500 m difference in height will be held on the Gran Tour circuit. The Brevet is ARI (Audax Randonnée Italia) certified and, from 2014, will become part of the Italian Championship with the 200 km circuit and of the Extreme Challenge Italia with the 300 km circuit with a difference in height of 5700 m. To obtain the two brevets it is necessary to follow ARI regulations in all points. From 9 September 2013 the Permanent ARIP Brevet will be established for both circuits.

2013 Grand Tour Rando is open to all members of the FCI and other sport organizations  (Uisp, Libertas, Acsi etc..) but it is also possible to participate by making a daily card and presenting a medical certificate for all cyclists aged over 18 and under 75.

At the start, each participant will receive a road book, a travelogue with maps and informations and the travel card dell'Audax Club Parisienne for the stamps because the Randonnèe is certified ARI - ACP and has the value of international patent approved.

All participants who complete the course on time (hourly average not less than 15 km/h and not more than 33 km/h) checking the "rando points" (4 fixed + 1 secret) will be released on patent. The route is 213 km long with an elevation of 3700 m. It is a difficult test but within the reach of all cyclists who have already ventured in competitions like the 9 Hills or the Dolomites Marathon. In 2014 there will be also the GRAND TOUR EXTREME Rando of 300 km. and 5700 m. in altitude.

For more informations we invite you to visit the official website of 2013 Grand Tour Rando, you can download the general regulation of randonnée, Gps track, map and altimetry  from the website www.audaxitalia.it

>> If you've decided to partecipate 2013 Grand Tour Rando you should contact now farmhouses and hotels along its bike route >> click this link.