Rocca del Leone of Castiglione del Lago is a magnificent building which  for centuries has been the most important military settlement placed on the shores of Lake Trasimeno and is formed by a wall with battlements polygonal Guelph , four towers and the triangular keep. It was begun in XII century on the ruins of an earlier fortification destroyed in 1091 by Henry IV ( 1050-1106 ) of Franconia. In 1297 the magistrates of Perugia decided to fortify the town and the next year they decided to build a fortress inside the castle to better defend the inhabitants. 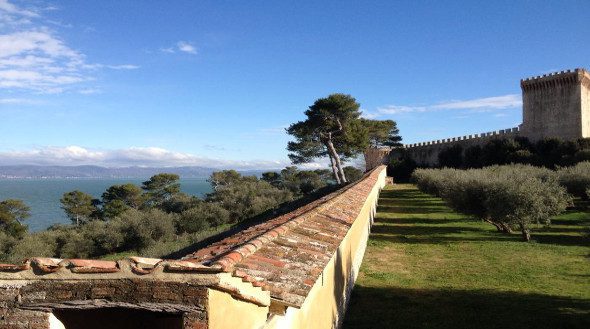 In 1501  Giampaolo Baglioni stabled here his residence, taking care to restore and expand the complex , works continued under his son and were completed by Ascanio Della Corgna I ( 1516-71 ). In 1554 Ascanio replaced some of the towers of the fortress with bastions and also by providing cylindrical create within the walls of a number of Italian gardens . He built the mansion that is now the seat of the town hall , restoring and expanding fourteenth-century buildings . Diomede, the adopted son of Ascanio I, made this palace in Castiglione del Lago become a literary salon, called The Gardens of Maecenas . The fortress, after the death of his nephew Fulvio II,  came under the jurisdiction of the Apostolic Chamber and in 1860 to the municipality of Castiglione del Lago.

Alberto Grohmann relates : " In the plant urban based on a checkerboard pattern , with a module with a square base repeated six times, can be traced clearly the number 3 . The town , in fact, three squares , three main streets , three doors , and also the keep of the tower has a triangular plan . "
From the tower you can enjoy a splendid view over the Val di Chiana and nearby Cortona, accessing by a striking passage that connects Palazzo della Corgna.

There are offers  for vacation rentals in the area of Castiglione del Lago! Click and Consult them immediately.