FameLab back in Italy: the international scientific talent show for fans of science that in three minutes and the sound of words will compete in communicating to the public a scientific topic that they are passionate about.

>>Do you want to take part in the international scientific talent show? Check it out now the best hotels in Perugia.

In Italy, the competition is sponsored by the British Council Italy, coordinated by Psiquadro and realized in collaboration with: Science Museum of Trento, Clouds of Naples, Association Science Festival of Genoa, FosforoScienza of Ancona, Trieste Imaginary Science, Perugia Science Fest INAF-OAB Perugia and Milan. 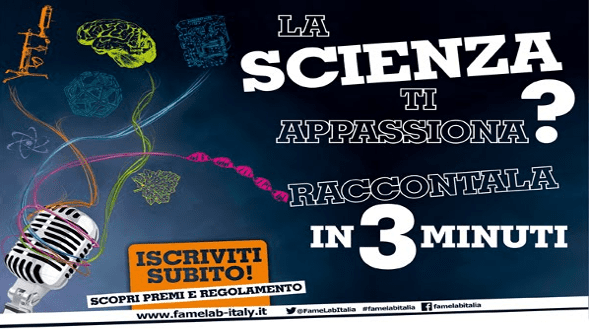 Other local selections that you can still sign up will take place on the following dates :

To compete , simply fill out the form downloaded from the website www.famelab - italy.it section how to participate and send it by mail, no later than the 23 of March 14 , 2014, at perugia@famelab-italy.it

Participation in the competition is free.

Please note that both the regional and the national stage will be played in the Italian language. The national winner who will compete in the international final will have to use the English language .

We remind you that for the regional selections you need to prepare two different presentations of three minutes: one for the pre-selection and final selection for , in the event that the competitor exceeds the pre- selection .

For the national selection is needed is just a presentation .

A qualified jury will designate first and second place in each city. The 14 winners of the local selections can participate for free on a two-day training on communication techniques of science organized in Perugia April 12 to 14 with international experts.

The national final will be held in Perugia May 3, 2014 at the Peacock Theatre .

>>If you have decided to participate in the third edition of FameLab, you should contact now with the best holiday cottages Perugia >> click this link.