Built around the III century B.C., this impressive Arch was one of the seven entrance gates to Perugia in the Etruscan period. After walking past it, and going down the Ulisse Rocchi street, it is possible to arrive at Corso Vannucci, the main street of the city. About two centuries after its construction, the inscription "Augusta Perusia" was carved onto it to celebrate the conquer of the city by the Emperor Augustus. 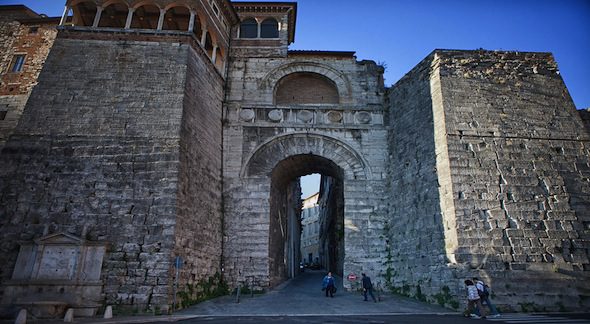 Perugia surrendered after he had besieged it for seven months around the year 40 B.C. It was the period of the civil war between Octavian Augustus and Mark Antony. The latter's brother, Lucius, had barricaded himself inside the city. At that time, Perugia was a bastion difficult to overcome, since it rose on a hill and the walls connecting the seven gates protected it.

Moreover, Dio Cassius' s chronicles report that Lucius's army was numerically strong and that the city had many provisions. Augustus decided to personally head all the military operations after the numerous defeats suffered by his generals. Eventually, the city gave in and the Emperor did not hesitate to invade, burn and loot it. Only the temples of Vulcan and Juno were saved by his revenge. To make up for his actions, Augustus conceded the survivors the possibility to rebuild the city and to refound it with the name of "Augusta Perusia" and this explains the presence of the inscription on the Etruscan Arch and above the Porta Marzia. 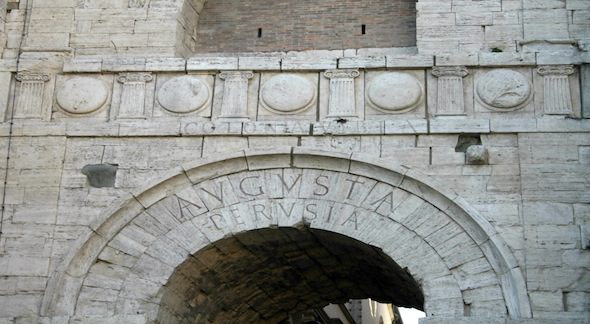 In the course of time, the arch has changed its name from Porta Terzia to Porta Borca, from Arco Trionfale to Porta Vecchia and Porta Pulcra. Nevertheless, this entrance has best preserved its characteristics in comparison to the other ancient gates of Perugia.

It is composed of two trapezoidal turrets and a façade with an arch. A Renaissance lodge can be seen above it. On the two sandstone blocks at its sides, the remains of two heads are visible. Once they represented the ancient deities that protected the city.
Above the arch, there is a frieze that can be recognized by its framed circular shield and there is also another Latin inscription "Colonia Vibia".

It was added by Gaius Vibius Trebonianus Gallus during his short period as emperor between 251 and 253 A.D., to honour the city with the "ius coloniae". The general Gallus, who had come to the throne during the period of "military anarchy" which announced the fall of the Western Roman Empire, was the descendant of an illustrious Etruscan family probably coming from Perugia. Only two years later, his same soldiers killed him because they joined another general, Marcus Aemilius Aemilianus, who was arriving in Italy to remove him from power. 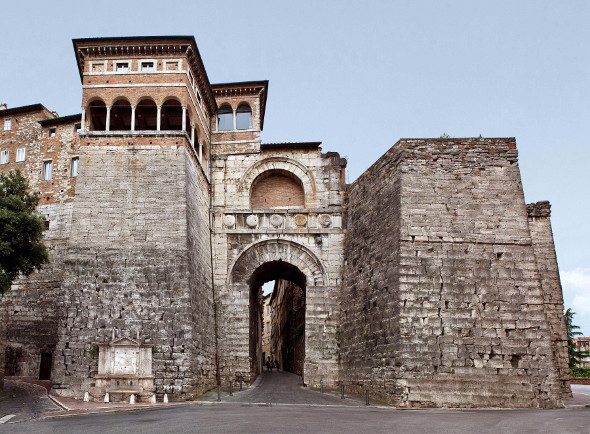