Conceived and created by Giorgio Lungarotti and his wife Maria Grazia, the Wine Museum was opened to the public in 1974 and is now managed by the Lungarotti Foundation. It is located in Torgiano in the pars agricola of the monumental Graziani-Baglioni Maison, a 17th century noble summer residence.

The museum covers twenty rooms and displays more than 2800 pieces, organized according to modern museological criteria and rigorous scientific protocol.

In addition to the Wine Museum, Lungarotti Foundation also owns the Olive and Oil Museum, also in Torgiano. 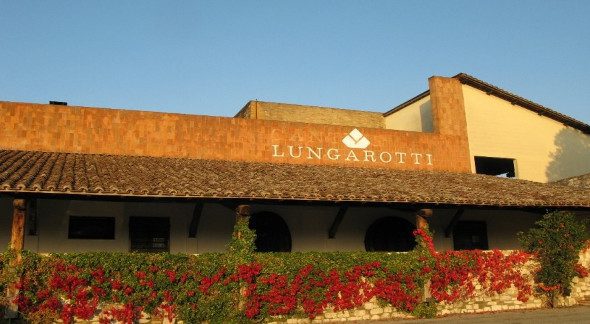 Archeological finds (Cycladic jugs and Hittite vases; Greek, Etruscan and Roman ceramics; glassware and bronze pieces) technical equipment and sets for viticulture and vinification, ceramic wine vessels from the Medieval, Renaissance, Baroque and contemporary periods, engravings and drawings from the 15th to 20th centuries, learned texts on viticulture and enology, artifacts of goldsmithery, weaving and other pieces representing the applied arts, all document the importance of wine in the collective imagery of the civilizations that over the millennia have lived in the Mediterranean basin and continental Europe. Starting back in antiquity, the vine, grapes and wine, essential elements in the agricultural economy of these peoples, have alternated between purely economic values and the religious and profane traditions and meanings. From the most remote era to today, their recurrence in arts and crafts is constant, either as a symbol for inspiration or for productive reasons. The individual collections in the museum propose the theme of viticulture and Bacchus as a leitmotiv for reading the historical events which the individual pieces depict.

In the archeological section, the most interesting piece is the Kylix with an inscription signed by Phrinos, a member of the Group of Minor Masters, a lovely example of Attic ceramics, datable to the 6th century B.C. and the elegant Askós in bronze from the Vesuvian area, dating back to the 1st century A.D.

The ceramics collection highlights one of the crafts that have most importantly characterized Umbria's artistic heritage; among the many pieces on display, all of which represent different schools and techniques, of particular note is the large 14th century hydria with a lion-shaped centaur and a mermaid, as well as the pilgrim's flask from Urbino, from the workshop of Orazio Fontana, whose ornate decoration includes a composition of subjects from Raffaello and Giulio Romano. In the display case with historiated renaissance plates, the plate called "L'Infanzia di Bacco / The childhood of Bacchus" by Mastro Giorgio Andreoli stands out. Inspired by an engraving by Marcantonio Raimondi from an idea of Raphael, it has particularly vivid colours and evocative iridescence resulting from the difficult luster-ware technique. In the section wine and medicine, apothecary vases - of various types and production areas - are matched with antique medical texts. The ceramics portion closes with a collection of modern works, among which are Dionysos Eydendros by Joe Tylson and La Baccante by Nino Caruso.

The engravings collection offers many points of interest: starting with a Bacchanalia by Andrea Mantegna (15th century) the collection shows the evolution of the dionysian theme over the centuries and the fortunes of the vineyard allegory in Christianity with the most representative engravers of Mannerism. The piece which emblematically represents vinification techniques is the imposing horizontal beam press from Gubbio using the so-called Caton principal, from the description made by this Roman agronomist in the 2nd-1st. century B.C. 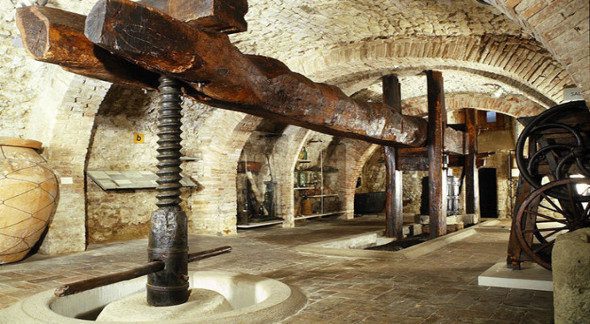 If you are in Torgiano, we will suggest you to visit also the Olive and Oil Museum
--> Click here for all informations