It is supposed that, already Etrurians and Romans, had established at the same place where today Città della Pieve rises. This characteristic village was touched by the events of the medieval history, and indeed, a number of masters had the control of the town until when Clement VII placed it under the direct control of the Church. At the center of the village, still today encircled to a good extension by the walls of 1300, having such a medieval style that here the narrowest street of Italy can be found (via Baciadonne),the Dome dedicated to the SS. Gervasio and Protasio rises; its original structure has to be dated around the XII century but modifications done during centuries XVI and XVII have modified the original shapes and styles. However, the more ancient construction still can be noticed by the decorations of the lower part of the facade, the apse and the gothic Romanesque bell tower.

Do you want to visit Città della Pieve? >> Check it out now of the best hotel in the vicinity. 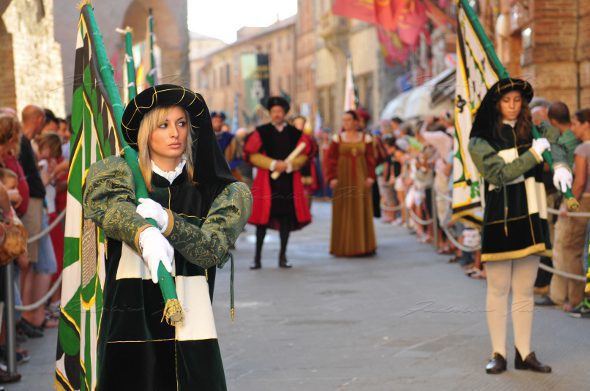 Inside the church, works can be found of Domenico Alfani and of two great painters from Città della Pieve, the Perugino: " Madonna and the SS. Giovanni Evangelista, Giovanni Battista, Pietro Martire e il beato Giacomo Villa ", " Madonna con Bambino e SS. Pietro, Paolo, Gervasio e Protasio ", " Battesimo di Gesu", and the Pomarancio: " Eterno e Angeli ". Beyond to the beautiful tower del Pubblico, high 38 meters and constructed since year 1000, the churches of S. Maria della Mercede and S. Agostino, which conserve respectively a fresco of the Perugino and a table of Pomarancio, one should not forget to visit the castel (La Rocca) and the church of S. Francesco, today sanctuary of the Madonna di Fatima. The former it is a solid defensive structure with towers, the latter, dating back to the XIII century, has works of local school and a "Pentacost" of the Pomarancio; finally, some works of the most famous painter of the city , Peter Vannucci, are conserved in the churches of S. Maria dei Servi e S. Antonio Abbate.  Among the most important manifestations taking place in the city we should absolutely mention the Race of the Terzieri Festival.

>> If you've decided to visit Città della Pieve you should contact now farmhouses in its vicinity! >> click this link.