The ancient small town of Roman origin called Bevagna is to be found on the western fringe of the Foligno plain, at the foot of the group of hills where Montefalco rises up and near the loop of the river Timia.

>> Do you want to visit Bevagna? Check it out now of the best houses in the vicinity.

Its modern-day appearance is surely the result of its developement during the Middle Ages. In fact, even if the Roman had constructed the ancient Menania in such a way that the Flaminia Road was the decuman axis of the town, the town's center is now placed more to the South. In Piazza Silvestri, you absolutely should not miss the Gothic Palace of the Consuls, situated singularly slantwise to the streets, amd the Churches of St. Sylvester (1195 d.C.) and St. Michael Arcangel; the fountain which completes the scene of this exceptional public area is, however, an adaptation dating back to the 19th century. Even today, the medieval town portals, even after reconstructive measures such as those of the Porta San Venanzo in 1797, and long stretches of the old town walls, are in a good state of preservation.

There are offers  for hotels in the area of Bevagna! Click and Consult them immediately. 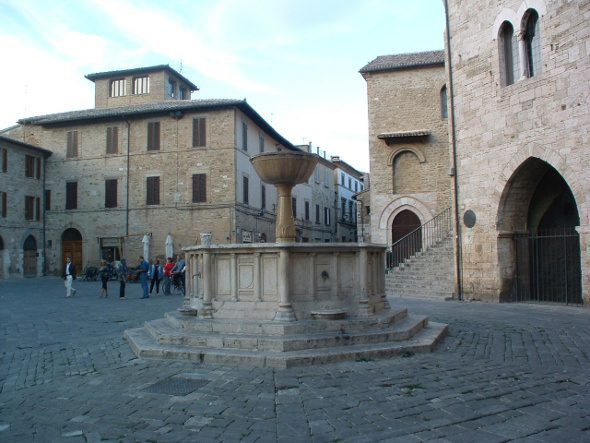 Other monuments testifying to the more ancient origins of Bevagna are not lacking: the ruins of a temple of the 2nd century A.C. on which the medieval church of the Madonna of the Snow was subsequently erected, the Roman theater (2nd century A.C.) which remains to serve as a foundation for a circular block along the course of the ancient Flaminia Road and the impressive remains of mosaics representing marine animals perhaps belonging to a thermal baths building. Among the most important manifestations taking place in the city we should absolutely mention the The Market of the Gaite of Bevagna.

>> If you've decided to visit Bevagna you should contact now farmhouses in its vicinity >> click this link.